The latest version of this document can be found online at https://dr-knz.net/go-executable-size-visualization-with-d3.html. Alternate formats: Source, PDF.

I built some tooling to extract details about the contents of a Go executable file, and a small D3 application to visualize this information interactively as zoomable tree maps.

Here’s a static screenshot of how the app illustrates the size of the compiled code, in this example for a group modules in CockroachDB: 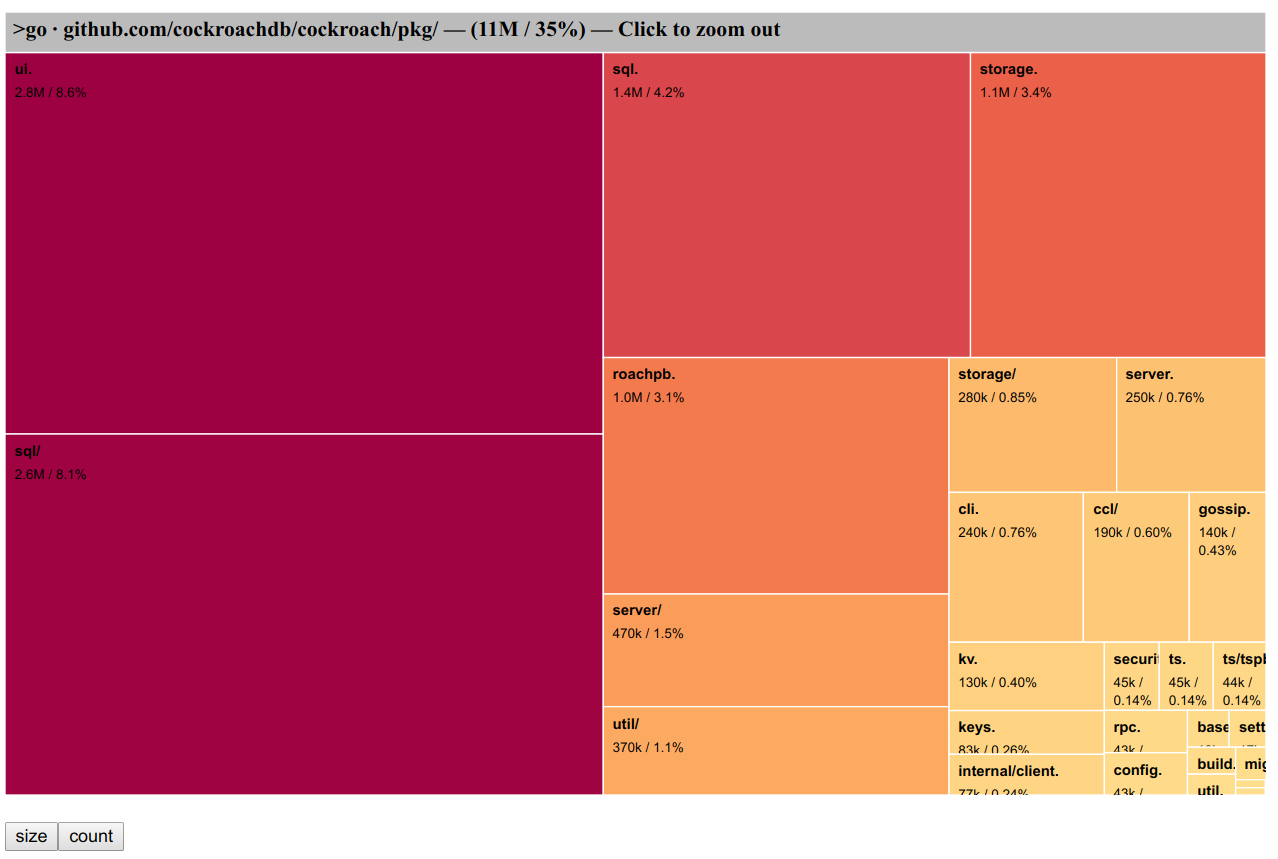 The reason why I built this was to help me discover and learn what makes Go executable programs larger than I would expect. Thanks to this tool, I made several discoveries about how Go builds executable files.

AnD YoU wOnT BeLiEVe WhAt I fOuND InSiDE! (Read more below.)

The source code is public on GitHub: https://github.com/knz/go-binsize-viz

My co-workers and I are busy preparing the latest release of CockroachDB, version 19.1. CockroachDB is released as a single program executable file containing all functionality.

This is especially puzzling given that:

These questions alone made me curious.

Meanwhile, I also personally care about program size for practical reasons: smaller binaries cause less cache thrashing. They are easier to distribute and deploy. They make container orchestration more nimble. For these additional reasons, I would prefer if CockroachDB release binaries could become smaller. Figuring out what they contain might suggest how to achieve that.

My goal was to find some clarity into 123MB of inscrutable executable data. I started without knowing exactly how to achieve that.

I knew about the standard Unix utility nm which can display the size of individual entries in an excecutable file, and I knew that Go provides its own half-baked re-implementation (go tool nm). However, even a small program in Go will contain dozens of entries, and there were tens of thousands in the particular files I was looking at. So I needed an overview.

I also knew about tree maps, ever since the movie Jurassic Park featured the fsn 3D browser in 1993. This visualization represents sized hierarchical entries—for example files on disk, and in my case also like entries inside an executable binary—using visual elements whose size on the screen is proportional to their size in bytes on disk.

Furthermore, reminding myself that I have potentially tens of thousands of entries to visualize, I decided upfront that it would do me no good to attempt to represent them all simultaneously on screen. I thus went looking for zoomable tree maps.

Finally, I already had learned some D3 basics and wanted to learn more, so I decided I would use D3 for this exercise too.

So I went to search for “zoomable d3 tree map” on my favorite search engine and discovered that D3 has native supports for tree maps, provided some input data in a suitable format.

I initially started to tinker with Mike Bostok’s zoomable treemaps but then quickly ran into some issue where some D3 feature I wanted to use was not available: Mike’s code uses D3 V3, “modern” D3 runs at V5, and there were major API changes between V3 and V4. Converting the V3 example to V4 (or even V5) seemed non-trivial. Instead I set out to find some examples built for V4+. I then discovered this example from Jahnichen Jacques, itself inspired from Mike Bostok’s, and finally this simpler example from Guglielmo Celata inspired from both but with a simpler implementation.

All these examples worked using D3 hierarchical data sets loaded from CSV or JSON with a particular schema.

The main thinking exercise was thus to massage the output of nm into a format suitable to load into D3. The rest of the work was simpler, to adapt D3 examples I found online into something that made sense for the type of data I was working with.

To build a tree visualization we thus need to decompose each symbol into name components that group the symbols into a hierarchy.

Intuitively, a Go symbol contains a hierarchical package path (e.g. github.com/lib/pq) and some package-local name. The package-name name is either global in the package (e.g. main), or a method name with some receiver type prefix (e.g. (*File).Write).

This model accurately describes a large majority of symbols, and can be readily decomposed using a simple regular expression. However, we quickly come across exotic names that do not fit this model:

I thus iterated to expand a simple regular expression to properly decompose the variety of names found in Go binaries. The result was a bit gnarly can be found here.

Intuitively, a C/C++ symbol contains a hierarchical namespace path (e.g. std:: or google::protobuf::) and then a variable or function name.

Again, looking at real-world binaries, we easily find many items that don’t fit the simple model:

Some difficulty arises from the fact that C++ symbols can contain an arbitrarily amount of nested template parameters or parentheses in types, and regular expressions cannot match recursively.

My current implementation is thus restricted to only supports 6 levels of nesting. This appears to be insufficient to capture all symbols in my program of interest (where some symbols contain 10+ levels of nesting!) but I chose to exclude a few symbols to keep my regular expression simple(r). In my target analysis, the size of these excluded symbols is negligible anyway.

Organizing the data as a tree

After decomposing the path components of each symbol, my program creates nested Python dictionaries using a simple recursive function.

However, the result of this strategy for the path a,b,c is something like this:

Whereas the D3 visualization code really wants this:

For this, I built a separate simplification program that turns the former format into the latter.

The reason why I separated the code into two programs is that the decomposition of symbols is rather expensive, and once I was satisfied with the decomposition I wanted the ability to iterate quickly on the tree transform without having to decompose over and over again.

Additionally, the simplification program collapses (“flattens”) multiple hierarchy levels with a single child into just one level with a combined name. For example, the hierarchy a/ → b/ → c/ → x,y becomes a/b/c/ → x,y.

On top of this logic by the previous authors, I added the following:

Example visualization for a simple program

We’ll use the following Go code:

I choose to use a large struct for variable x so that the main package becomes significant in size compared to the imported runtime objects.

The program can be compiled as usual:

I then use the following commands:

The following HTML code is sufficient:

Which renders as follows (ensure Javascript is enabled):

Although this simple executable file appears to only contain Go symbols, it actually does contain C/C++ symbols too. However, their size is negligible and they initially appear as a mere line on the right side of the tree map. By clicking on that line, you may be able to zoom into them and obtain this: 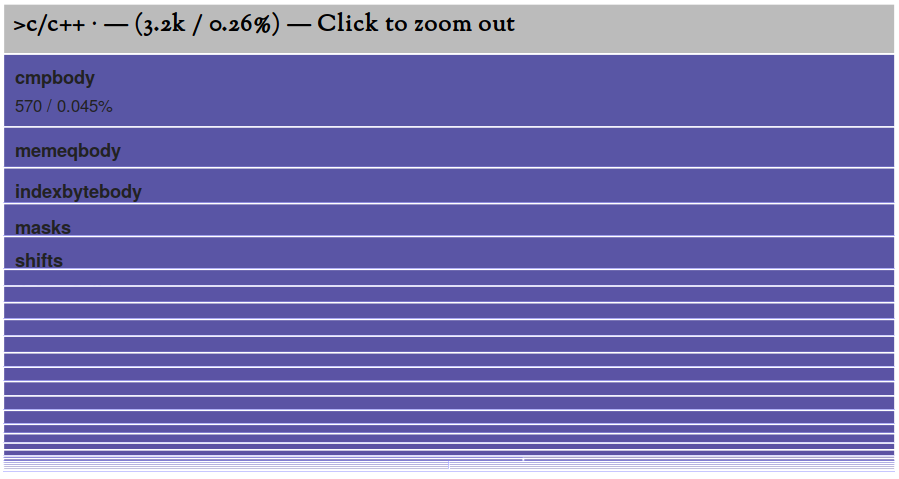 The small programm above contains 6 lines of source code and compiles to a 1.3MB binary. The breakdown of sizes is as follows:

In addition to code compiled from source, 24K (1.9% of size) are compiler-generated type equality and hashing functions. These are accumulated in the box TYPEINFO in the tree map.

We’ll come back to this below.

What’s inside a CockroachDB executable binary?

Applying the tool on a recent CockroachDB build, one can find the following:

By exploring this visualization, we discover:

We established above, in the simple example, that runtime was about 900K in size. Now it has become 26M—a 28X increase! What is going on?

Zooming in, the mystery is revealed: all of the increase went into that single object runtime.pclntab. The other entries in package runtime do not appear to differ between programs.

We will come back to this pclntab object later below.

Recalling the initial problem statement, CockroachDB increased about 40% in source code size between v1.0 and v19.1. Thanks to the visualization, we observe that the compiled code that directly originates from the CockroachDB sources increased from 16M to 32MB, which is about a 100% increase.

It is not too well documented however this comment from the Go source code suggests its purpose:

// A LineTable is a data structure mapping program counters to line numbers.

The purpose of this data structure is to enable the Go runtime system to produce descriptive stack traces upon a crash or upon internal requests via the runtime.GetStack API.

So it seems useful. But why is it so large?

The URL https://golang.org/s/go12symtab hidden in the aforelinked source file redirects to a document that explains what happened between Go 1.0 and 1.2. To paraphrase:

In other words, the Go team decided to make executable files larger to save up on initialization time.

Also, looking at the data structure, it appears that its overall size in compiled binaries is super-linear in the number of functions in the program, in addition to how large each function is. We will come back to this below.

Of size/performance trade-offs and use cases

The change in design between Go pre-1.2 and go 1.2 is a classic trade-off between performance (time) and memory (space).

When is this trade-off warranted?

In the case of CockroachDB, runtime.pclntab could soon exceed the entirety of code compiled from sources, even with a conservative assumption of linear growth in compiled code size:

To understand the internal structure of executable files compiled from Go, I built a D3 visualization using zoomable tree maps. This visualization is published on GitHub and has been tested to work with any executable produced by Go versions between 1.4 and 1.12.

Using this tool, I have analyzed the space usage inside the monolithic CockroachDB binary, cockroach. I discovered that the majority of the growth of cockroach over time is concentrated in one object, runtime.pclntab.

This object is automatically generated by the Go compiler to support the generation of textual stack traces at run-time, for example in error reports.

A design choice made in Go 1.2 causes this object to grow super-linearly in the number of functions in a program, in addition to the sum of their sizes. Between CockroachDB 1.0 and 19.1, runtime.pclntab grew by 230% while the total amount of source code only increased by 40% and compiled code by 100%.

This design choice was intended to lower the start-up time of programs, and contrasts with the previous design using compressed tables—which is, incidentally, the industry standard for other C-like languages, even in contemporary compilers. This performance goal is not relevant to server software with long-running processes, like CockroachDB, and its incurred space cost is particularly inconvenient for large, feature-rich programs.

In 2021, the situation is slightly different but arguably worse. Read the followup analysis for more details.