In the Bubbline project we are trying to build readline-like semantics on top of Charm’s Bubbletea.

As of Bubbletea v0.23, we discovered this is currently impossible to do in a way that preserves input continuity reliably across readline invocations.

This result is general. Any Bubbletea-based program or library, including Bubbline and Charm’s flagship gum toolkit, suffers from this flaw. It makes Bubbletea only suitable for interactive use with relatively slow human input. Integration with unit testing frameworks or scripts that control the execution of the enclosing unix process is doomed to remain brittle and unreliable.

An improvement to this situation would require extending the execution model of Bubbletea with new primitives.

The Bubbline project was built with the aim to replace go-libedit as the main line editor in the CockroachDB SQL shell.

Unix line editors, of which GNU readline is probably the most famous, offer a conceptually simple service: ask the user to provide some textual input, and then provide this input to the program.

After the initial implementation, and subsequent integration in CockroachDB, we found that the Bubbline editor performed well with human users but that it was impossible to integrate the resulting SQL shell in its unit test suite: tests were failing non-deterministically.

More specifically, the input provided by the test framework was either lost or garbled. In the following blog post, we find out how Bubbletea is responsible for this problem.

The API for a line editor is always about the same:

In-between calls to the line editor, the program is free to interact with the terminal as it wishes: the editor only owns the terminal when the API function is being called.

An important property of line editors is input continuity: if a user types something on their keyboard before the program transfers control to the editor API, that input will be picked up when the editor API is called.

A secondary, also important property is graceful input transfer: after the user completes one input (typically with the enter key), any further user input remains in the terminal input buffer so that the program can find and consume it outside of the line editor, or to subsequent editor calls.

As we will find out below, Bubbletea v0.23 is currently unable to provide input continuity nor graceful input transfer.

Bubbletea is inspired by the Elm component model: 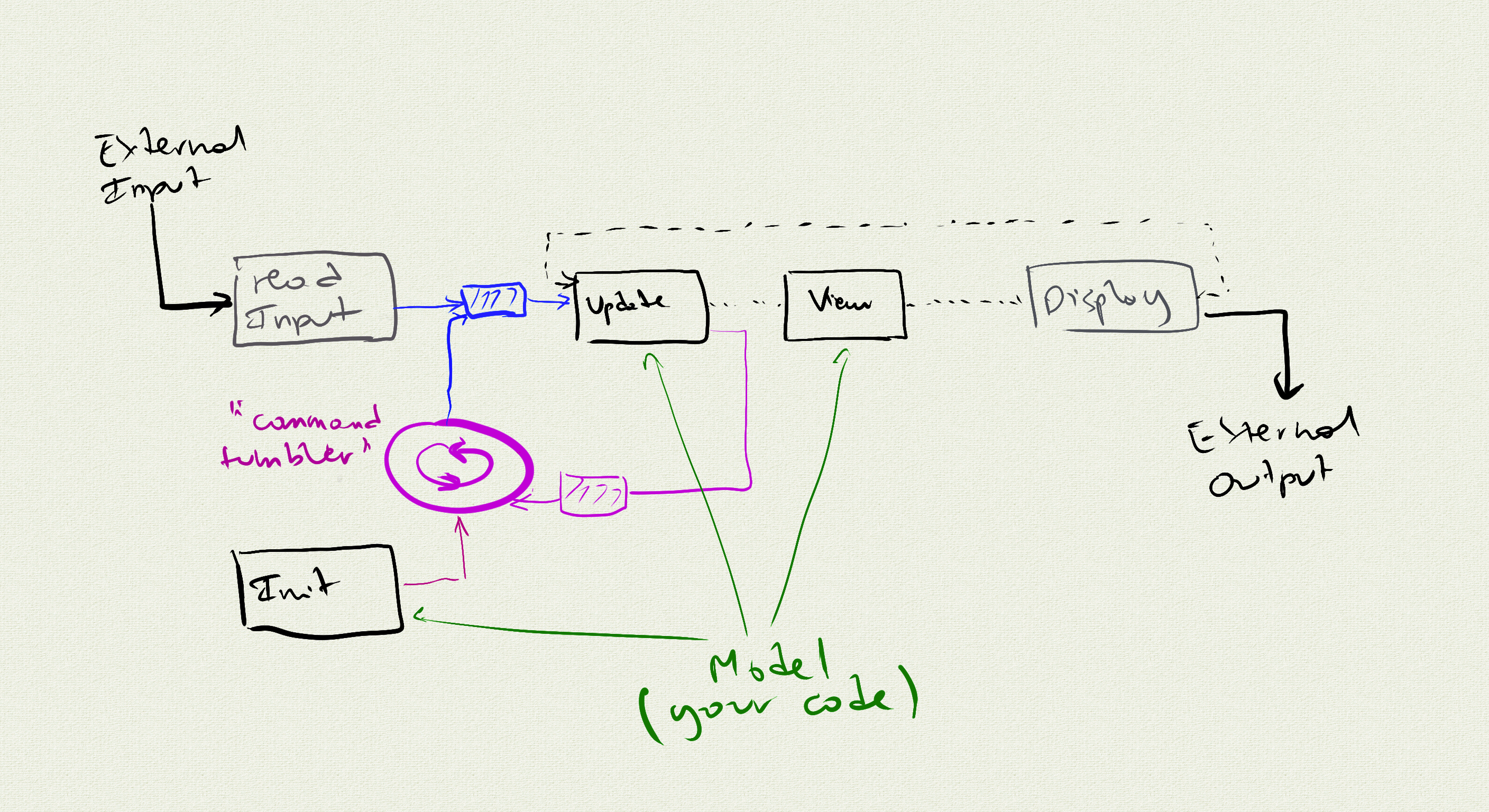 The control flow inside Bubbletea has a “main event loop”, which calls Update and View one after the other and displays the View results. Then, asynchronously, it reads external input to produce Messages, and also separately converts Commands into Messages.

Of note about the order of processing:

The first version of Bubbline, current as of this writing, is constructed as follows: 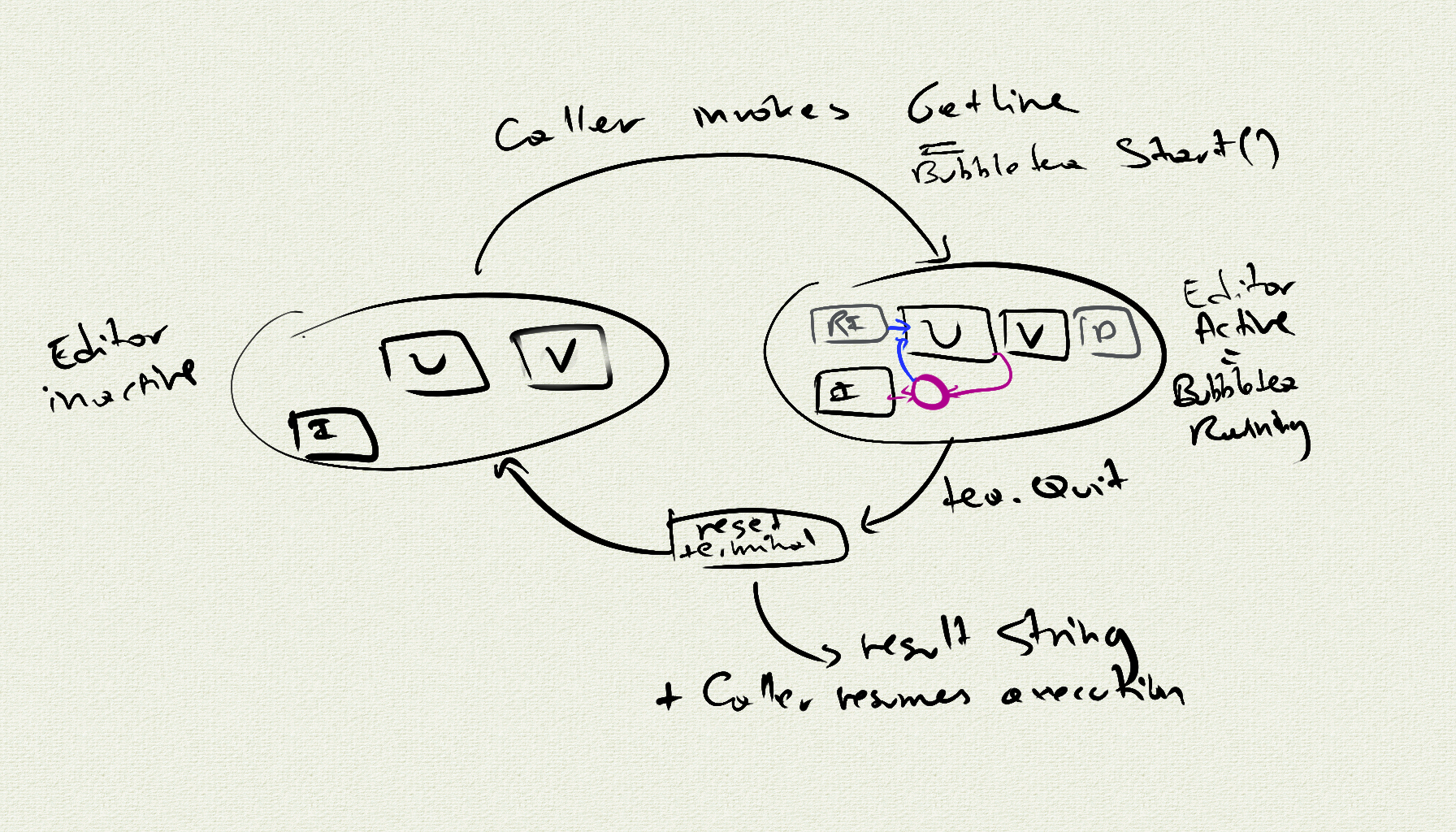 In other words, Bubbline is inverting control away from Bubbletea, taking it away from the Bubbletea event loop and places it back into the hands of the surrounding program.

With a slow input at the keyboard, all seems to work well.

Alas, the moment the input comes fast, for example in unit tests, everything breaks down.

What is happening really?

Because of these problems, if input comes into the terminal sufficiently fast after the Enter key has been typed, for example if it was pasted/buffered all at once by a test:

These are both violations of the two desirable properties: there is no guarantee of input continuity nor graceful input transfer.

Sadly, there is nothing that Bubbline can do about this. Not even a “sleep” function call inside the GetLine function would help: this input corruption is a feature of Bubbletea alone.

The following Go unit test demonstrates the problem identified above, using a simple model that remembers the last input key entered before an Enter key, and a test condition that checks for input continuity.

If you run this test, you will see that it simply blocks: the very first Bubbletea activation will succeed in reading the entire input buffer before it shuts down, discarding the remaining input on the way, so that the second iteration of the test loop has no input remaining to consume.

Segue: not just Bubbline is affected

Any tool using Bubbletea will gobble up / lose input from the terminal after the Bubbletea framework has shut down.

This will be especially visible with the gum toolkit, for example when redirecting input from a file into a script calling multiple gum commands in a row.

Attempt at a solution: hijacking the event loop

The main insight when analyzing the cause of the problem is that the Bubbletea shutdown logic is where the input corruption happens.

If we could avoid shutting down Bubbletea, we could perhaps avoid this problem altogether.

So here’s an attempt at a solution: instead of having Bubbline re-start and shut down Bubbletea at every GetLine call, start Bubbletea asynchronously only once, then make GetLine interact with it using FIFO channels.

And … this seems to work. Here is an example Go test that demonstrates this design:

If you run this unit test, you will see that it passes reliably.

The reason why it passes reliably is that the asynchronous input reader function remains running across all transfers of control between Bubbletea and the test.

So the conversion from the input string to a stream of input Messages is never interrupted and all these Messages are eventually processed by an Update call in the right order.

This is progress! In this way, we certainly get input continuity.

However, there is still trouble ahead.

In the design above, the Bubbletea input reader remains running in the background. It can still “gobble up” input from the external input stream.

So when the GetLine call re-takes control of Update and the Bubbletea event loop, some input coming after the Enter key is already processed by the Bubbletea input reader and queued as Bubbletea Messages.

That input is then irremediably lost from the external input stream: the main program cannot find it there any more. It has been “captured” by Bubbletea, only usable by the next GetLine invocation.

This design thus fails to provide graceful input transfer (to the main program).

Although the lack of graceful input transfer might be acceptable for CockroachDB’s SQL shell, it is not acceptable if Bubbline is to become a more general-purpose tool in the Go ecosystem.

Although the Go unit test passes reliably, an actual attempt to build Bubbline on top of this design fails spectacularly: after GetLine blocks Update and passes control back to the main program, the terminal has become unusable by the main program.

This is because when the Bubbletea event loop starts, it “takes ownership” of the terminal and puts it into raw mode, hides the cursor and does other initialization suitable for the Bubbletea display function. When GetLine blocks Update, the terminal is still in raw mode and has become unusable for normal I/O.

In order to make progress, we can try to to re-take ownership of the terminal in the main program after blocking Update, and then restore the Bubbletea terminal configuration at the next GetLine invocation.

Seemingly helpfully, Bubbletea provides an API that appears to do what we want: a pair of functions ReleaseTerminal() and RestoreTerminal().

We can extend our test program above to use it. This program is approximately equivalent to the previous one, with a new call to Bubbletea’s ReleaseTerminal() and RestoreTerminal() at the point where our Update function blocks.

The previous version was running flawlessly, and this one did not change anything about control flow, so we should expect it passes just as well?

Alas! After one or two successful iterations, the test fails again with some corrupted input. Input continuity has been lost again.

The reason for this flaw is tragically simple: Bubbletea’s ReleaseTerminal() stops the input reader function asynchronously.

This mechanism has two separate problems:

In other words, a limitation inside the cancelreader library causes loss of input during ReleaseTerminal(), in a way that Bubbletea clients cannot work around.

Because ReleaseTerminal() is called in every Bubbletea program, if only during Bubbletea shutdown, this limitation every program in the Bubbletea ecosystem, such as gum, equally.

At the heart of the current problem, is the fact that Bubbletea’s input reader function is running asynchronously and loses input bytes or events upon cancellation.

Of note, neither the venerable GNU readline, nor BSD libedit suffer from this flaw. The reason is that they both read external input synchronously, one input event at a time, and handle cancellation using synchronous checks in-between events. Once the editor has decided that input is complete and decides to shut down, the next event has not been read yet and is still available in the external input buffer. These editors, like most, provide input continuity and graceful input transfer natively by avoiding asynchrony while reading input.

Can we achieve the same with Bubbletea?

This would require a couple of architecture changes:

We’ve found that Bubbletea-based programs currently non-deterministically lose input entered on the terminal after they start shutting down, but before they terminate.

This window of time is typically small, less than 200ms, and is thus negligible for human users. However, it makes Bubbletea (as of v0.23) unsuitable for integration in automated scripts or unit tests that deliver input to Bubbletea faster than a human user.

The following Bubbletea issue has been filed to track this situation: https://github.com/charmbracelet/bubbletea/issues/616

There is a way forward though, with careful changes to the architecture of the Bubbletea event loop. It is yet unclear when Bubbletea will be improved in that way.