And so here we come to the end of this week’s series on autism acceptance.

Today’s post in the series will explain various forms of intersectionality where autism is involved, and also how autistics generally have a larger social problem to deal with than identity politics: a particular form of class struggle.

I am not the only one noticing this and finding it to be an issue. In fact, part of why there is an “autistic community” is to collectively do some finger pointing: we find it silly and slightly disrespectful when folk pretend to be authoritative about autism but without input from autistic folk.

In my experience, one way to distinguish them is how they talk about autistics: autistic folk self-identify as “autistic” while allistic folk refer to autistics as “people with autism” or “people on the autism spectrum”.

Most autistic folk I know find the “person-first” approach to be disrespectful. Conversely, only folk who do not care to actually listen to autistics would not know this and continue to use the person-first approach.

Relevant video: Nathan Selove — five ways to be a better ally for autistics

Parents of autistic folk, in particular parent caregivers of autistic folk with high support needs, often experience their role as parent/caregiver as a struggle. So much so, in fact, that there is a community of “autism parents”.

As far as I could see during my research, most parents who seek such communities are allistic themselves.

I noticed this as follows: there are, in fact, many autistic parents too—autistic adults with their own children. Since autism has a genetic component, in many cases the children of autistic parents are also autistic. By looking at the family dynamics of autistic parents with autistic children, I noticed that many of them do not experience this situation as a particular struggle that’s worth identifying over. For them, it’s just regular parenting, with some specific challenges added. Experiencing struggle while raising an autistic child, and needing a community to share this struggle, seems to be a distinctly allistic problem.

Yet another aspect worth talking about is the diversity of sexual preferences and gender expression in autistic folk.

As far as I could find, it is yet unclear whether the correlation between autism and non-heterosexuality is an effect of nature (i.e. it exists no matter what people realize) or merely an effect of reporting.

This last point should not be under-stated: autistic folk are much less sensitive to certains social norms and often do not perceive social expectations, including the expectation to pass as heterosexual.

The theory goes as follows: a an allistic person who’d be, say, a 1 to 4 on the Kinsey scale, is more likely to self-identify as exclusively heterosexual for convenience or out of fear of social reprisal; whereas an autistic person would not care to maintain that facade and just be open about the fact they are not a 0 on the scale.

Meanwhile, my observation is also that autistic folk are more likely than allistics to report being asexual; either due to sensory over-sensitivity, inability to handle physical relations without emotional dysregulation, discomfort at navigating the seduction rituals, etc.

A larger contingent is also self-reporting as demisexual, that is, disinterested in sexual relations until a certain level of trust is established already. Demisexuality in autism often stems from the anxiety generated by masking; an autistic person can only become sufficiently relaxed and enjoy sexual activities when they feel sufficiently comfortable dropping their mask and being themselves, which is (unfortunately, to this day) a luxury that only becomes available at later stages in relationships.

Separately, there is also a noticeable correlation between autism and gender diversity.

Here there are two separate points worth mentioning.

For one, a larger percentage of the autistic population is also non-gender-conforming than in the allistic population. For this point, I would simply refer to the same argument as the point above: autistics are generally less able or interested in following social norms, which enables them to behave more flexibly with regards to gender expression. (This is compatible with the contemporary theory that gender expression is mostly a social construct.)

Then it is also the case that the rate of reported gender dysphoria and transition is higher with autistics; my understanding is that gender dysphoria is not particularly higher with autism, but autistic folk are generally less able to deal with the internal turmoil that comes with even the lightest form of dysphoria (where an allistic person would just “suck it up” and pretend, either out convenience or fear) so it ultimately gets handled more visibly—either by choosing to present as non-binary, or by transitioning.

Autistic folk who are also part of racial minorities suffer more anxiety and are at higher risk of depression, self-harm and other illnesses. This is a tragedy.

Unfortunately, I am not yet well educated on this topic so I cannot share more about this today.

As the various points above show, intersectionality is a strong part of the autistic experience.

Yet, we do not see autistic folk take action and participate in identity politics. Why is it so?

The answer, in my opinion, is nicely summarized by the following meme: 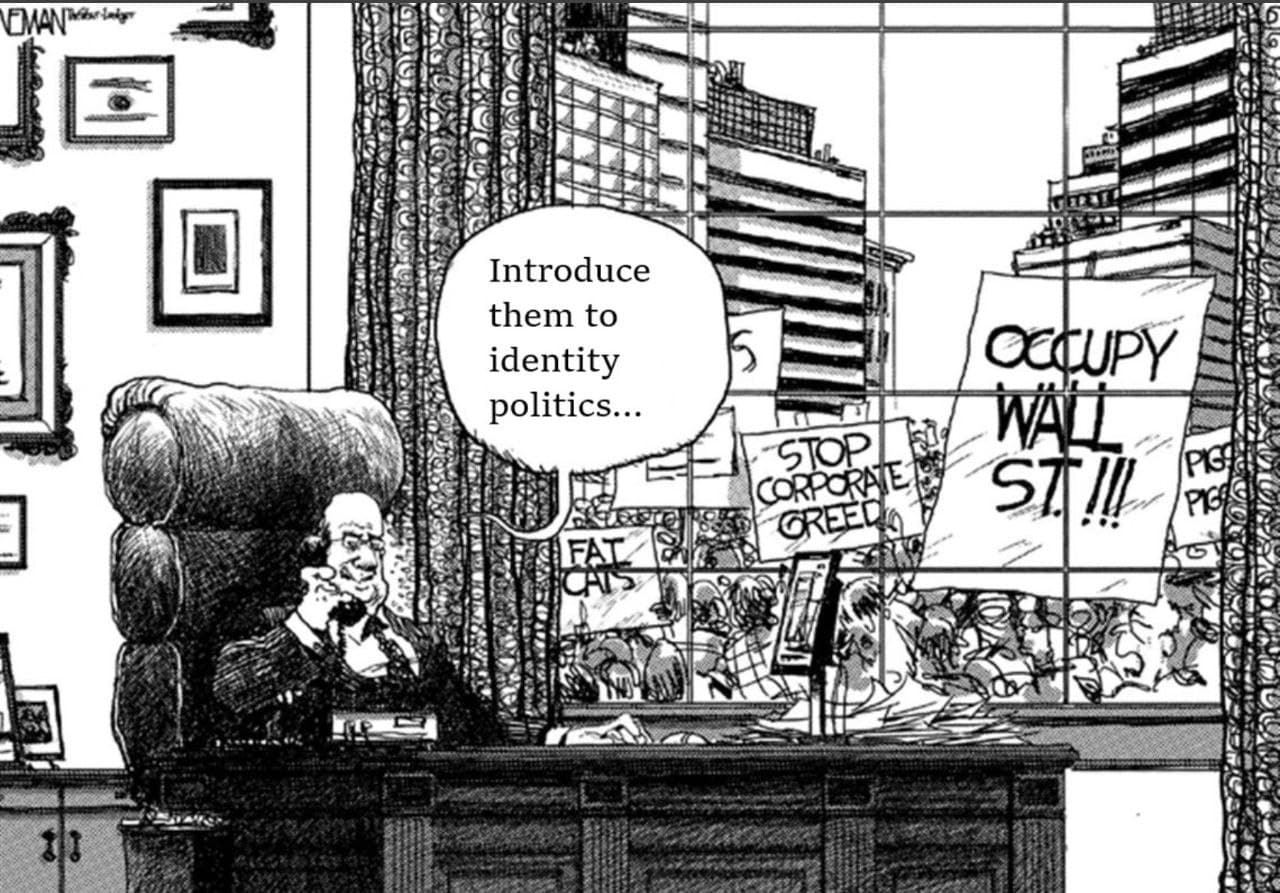 The origin of this image is the theory that the corporate establishment diluted attention away from the Occupy Wall Street movement by shifting focus to identity politics and creating internal struggle inside left politics between various identity groups.

This is a contemporary variant of the following joke:

A banker, a worker, and an immigrant are sitting at a table with 20 cookies.

The banker takes 19 cookies and warns the worker: “Watch out, the immigrant is going to take your cookie away.”

What does this have to do with autism?

The reality is that autistic folk are generally disadvantaged on the labor market; one in a way that is tragic, and one that is properly scandalous.

The tragic way, which is out of scope here, is that certain autistic folk are unable to access the labor market in any way because they are properly unable to handle the pressure to perform in a social context. In this case, autism is a disability, and we can be thankful that society at large has accepted to support their existence outside of the labor market.

Meanwhile, a larger number of autistic folk do have access to the labor market. They struggle with applying for jobs, but they do eventually succeed in trading their labor for compensation.

And here comes the rub, which I find absolutely scandalous: many employers abuse certain traits of autistic folk to systematically pay them less for their labor than what it is worth—or, conversely, make them work more (deliver more labor) than their peers for the same price.

There are three dimensions to this.

One is the different value of special interests / enthousiasms for autistic folk and their employers.

Employers know this, and dishonestly take advantage of this.

The naive response to the point above is that autistic folk “just” have to become better at negotiating their wages.

However, negotiation itself is a social process full of uncertainties and social subtext, and thus one that most autistic folk find extremely anxiety-inducing. Autistic folk either do not like or do not know how to negotiate, and often both.

This causes a scale of problems on the labor market:

Overall, autistic folk who trade their labor for money would benefit from a special support structure that would help them with negotiating their wages.

Naturally, employers have a strong incentive to not provide this support.

Meanwhile, the mental health community is primarily centered on medical conditions and simply is not aware of this problem, and thus has little advice to provide to caregivers and autistic individuals on this topic.

And so this situation continues and autistic workers are chronically underpaid for their labor.

The third dimension is how the productivity benefits of autistic hyperfocus and attention to detail can cause antagonism with allistic co-workers.

There are two aspects to this.

For one, allistic co-workers can be legitimately afraid when an autistic person delivers free labor (see point above) that it will depress their wages or limit their opportunities for wage growth. This is a real risk and it can cause anger and resentment.

The second aspect is that most allistic folk on the workplace are in a constant state of competition with their peers, mostly competing for social status and self-worth. When hyperfocus and attention to detail enable an autistic individual to out-perform their allistic peers, especially when this does not seem to cost the autistic person particular effort, this can cause envy and resentment.

This antagonism is really a tragedy, and one that plays to the benefit of the employer and at the expense of the workers:

This cycle is self-strengthening and benefits only the employer.

So the employer has a strong incentive to not break it and even foster it, to some extent—up to the point just before folk realize what’s up and/or burn out.

I find this personally disgusting.

So what can we do about this?

Here is my strategy, as a three step process:

That’s all for today!

Feel free to reach out to me to share your experience: what is “autism identity” to you? Which forms of intersectionality matter to you more?

When did you first realize how autism influenced class struggles? How do you suggest autistic folk can best approach wage negotiations? How to foster better, more balanced and fair relationships between employers and autistic employees?